Information about the breed

The Polish Tatra Shepherd Dog is an ancient regional race, but its career as a breed is fairly new. The shepherds took it fast and loose with the appearance. Their dogs, meant to guard their homes, property and cattle had to be reliable guardians, keeper and helper (czuvac), which means able to work independently and be cautious with strangers. They needed to be strong, but also agile and intelligent enough to be able to compete against wolves and bears. Because of the sheep, preference was given to white dogs.

It was only after the First World War that there was a split between the different types of white mountain dogs and they became various breeds.

During World War I the Polish army also sought resistant dogs in the country and thus many “owczarki” from the Podhale region were annexed by the army. They worked among others as messenger dog, scout dog, ammunition carrier, sled dog, service dog, rescue dog and guide dog. In 1937 an exhibition was held in Zakopane of these all-rounders. Plans were made to establish an independent club and a standard had to be drawn up. Unfortunately these plans were abruptly ended as World War II broke out. The Tatra Shepherd Dog was considered a soldier and whether they were in the army or not, they suffered heavily from this. The end of the war seemed to be the end of this ancient breed. But the Tatra Shepherd Dog dog had learned to survive over thousands of years. 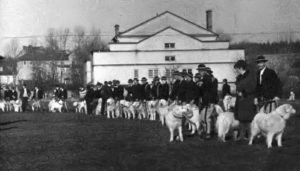 In 1956 there were 110 Tatra Shepherd Dogs on the exhibition in Zakopane and they began again restoring the breed.

A breed club was established, a standard formatted and one began selecting breeding stock. Dr. Dereziński has played a very important role here, he has represented the interests of the Tatra Shepherd Dog and without his commitment to the breed, it would not be on the level what it is today.

In 1967 the first breed standard is accepted by the Federation Cynologique International (FCI), ever since they are officially called Polski Owczarek Podhalański.

This website uses cookies to improve your experience while you navigate through the website. Out of these, the cookies that are categorized as necessary are stored on your browser as they are essential for the working of basic functionalities of the website. We also use third-party cookies that help us analyze and understand how you use this website. These cookies will be stored in your browser only with your consent. You also have the option to opt-out of these cookies. But opting out of some of these cookies may affect your browsing experience.
Necessary Always Enabled
Necessary cookies are absolutely essential for the website to function properly. This category only includes cookies that ensures basic functionalities and security features of the website. These cookies do not store any personal information.
Non-necessary
Any cookies that may not be particularly necessary for the website to function and is used specifically to collect user personal data via analytics, ads, other embedded contents are termed as non-necessary cookies. It is mandatory to procure user consent prior to running these cookies on your website.
SAVE & ACCEPT