From ancient times the Romans can teach us about the character and nature of the white dog varieties. This is what they have written about them: its nature will be neither confidential nor shy or aggressive. He will be more cautious than reckless. He must, after being approached with bad intentions, react   with shrewdness and menacing, scaring off his opponent with excessive barking, so that he can retreat. Who still is approaching him, he will furiously attack. That was the first duty of these dogs that will not be attacked. The second duty was to defend themselves with courage and perseverance.

These words actually have fully described the characteristic of these dogs. The Polish Tatra Shepherd Dog is a protective – and a guard dog. Dogs that are used over thousands of years to take care for the herd they are trusted with without the help of man. And in this task, which they always feel obliged to do, three principles apply: 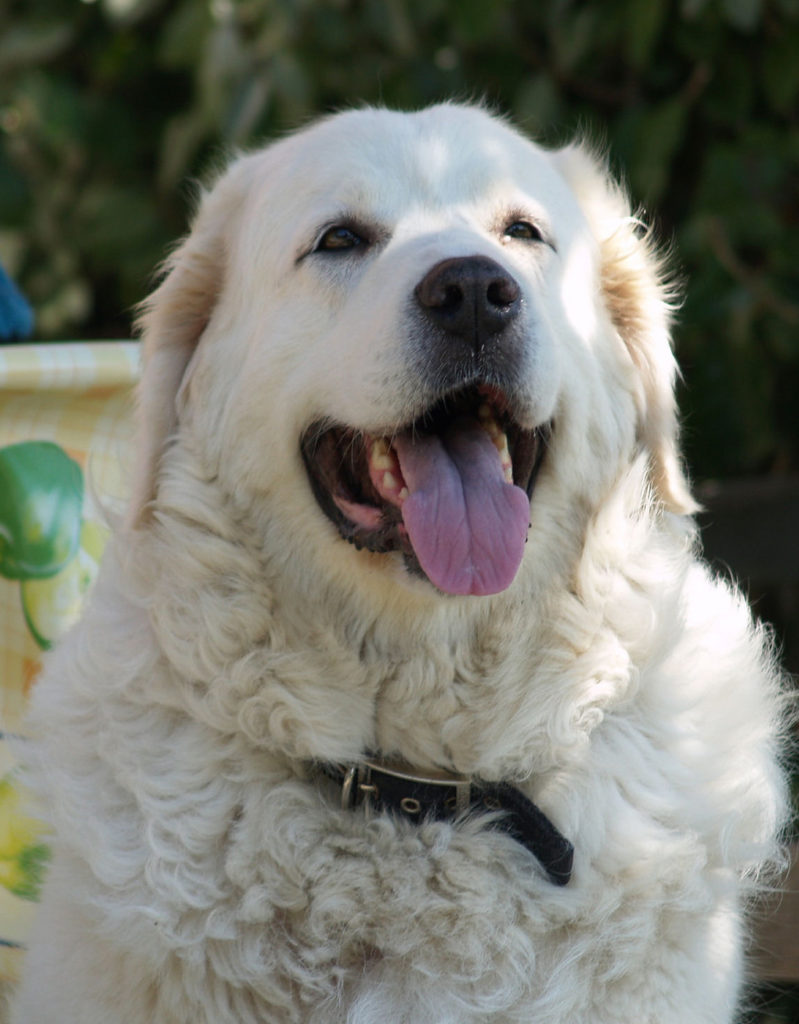 1) An ever alert attentiveness to everything and everyone.
2) A healthy, reserved attitude and prudence towards things that are new to him.
3) He must be highly intelligent to assess new situations and if necessary act accordingly

Nothing escapes the attention of a Tatra Shepherd Dog. Not even when he seemingly is dozing, he notices the smallest changes in its environment, both a wad of paper that fell off the table and the ball in the garden of the neighbors who was not there yesterday. Small objects are immediately carefully explored and absorbed. Larger objects such as a new cabinet or a table lamp will at first be observed reluctant from a distance, cautiously examined and only then accepted.
Strangers who do not know the Tatra Shepherd Dog, summarize this reluctance of the dog as anxiety or shyness. This is not at all the case.

A Tatra Shepherd Dog needs freedom of movement and time to be able to judge independently himself, wait and act. A Tatra Shepherd Dog is not a dog to command:” it is ok, stay”. He will and shall judge by himself. He will do just that, usually in the sense of what is best for my master.
The Tatra Shepherd Dog is extremely affectionate towards his own pack (family) and their friends. He follows and protects 24/7 and prefers to be close to his pack always. He does not follow because commanded, he follows, because he feels responsible and attached to his pack. No doubt this “responsibility” cannot be separated from the fact that one has to give him the freedom of movement that a good watcher needs.

Related to this innate sense of responsibility are three conditions, if you want to live with a Tatra Shepherd Dog on good terms and in harmony.

A Tatra Shepherd Dog:
– always needs a good relationship with the family. It is not a dog just for the kennel and the garden. He shall be unhappy when he has to live separate from his pack (family). He should always be able to decide himself whether he wants to be near his pack or not.
– is not a suitable dog for people who want an absolutely obedient and submissive guardian. He does not act on command, just out of conviction and affection. You do not have to learn a Tatra Shepherd Dog to guard and protect, he does it naturally. The last sometimes rather has to be tempered a bit.
– can learn everything, but he is not a dog who bites in a training sleeve happy and cheerful and let them beat him. Under pressure, he does not respect the rules imposed by people, he has a mind of his own and finds his way out by himself in all circumstances.

This website uses cookies to improve your experience while you navigate through the website. Out of these, the cookies that are categorized as necessary are stored on your browser as they are essential for the working of basic functionalities of the website. We also use third-party cookies that help us analyze and understand how you use this website. These cookies will be stored in your browser only with your consent. You also have the option to opt-out of these cookies. But opting out of some of these cookies may affect your browsing experience.
Necessary Always Enabled
Necessary cookies are absolutely essential for the website to function properly. This category only includes cookies that ensures basic functionalities and security features of the website. These cookies do not store any personal information.
Non-necessary
Any cookies that may not be particularly necessary for the website to function and is used specifically to collect user personal data via analytics, ads, other embedded contents are termed as non-necessary cookies. It is mandatory to procure user consent prior to running these cookies on your website.
SAVE & ACCEPT